I have an impressive collection of scars, despite the fact that I’ve never played hockey or rugby. Yes, I’m clumsy. I’m not proud of that fact, I’m simply resigned to it. It’s been there from the start. I’ve never had impressive hand-eye coordination, probably because as a 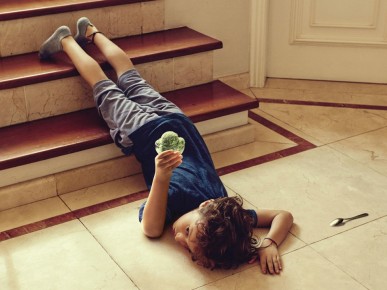 kid I used my hands to turn book pages, rather than to throw balls; or because I’m perpetually lost in thought. In this, I identify with Princeton professor Albert Einstein, who was reportedly so oblivious to his surroundings that he often walked through a fish pond on his way to class. Although, in my case, it’s not quantum mechanics but storytelling that sets me adrift. I spilled coffee on myself while I was thinking up this blog post. And it occurred to me (while spilling coffee on myself) that each of my scars represents not just a butterfingered moment, but a small revelation.

My first lumpish revelation occurred in Downey, California, a suburb of Los Angeles. It was summer, and my best friend forever (that year) Stevie was on vacation. So, out of desperation, I condescended to play with 2-year-old Cheryl from next door. I began acting out a half-baked swashbuckler, leaping about in piratical jeans and juice-stained t-shirt. Cheryl was anxious to join in. So, when I shouted, “Fire the cannons!” she picked up the nearest cannon ball, an empty milk bottle, and hurled it with buccaneerish gusto.

The cannon ball exploded spectacularly. Against my bare foot. Which responded with an even more impressive explosion of blood. No fake Hollywood stuff for us, no, sir, we went in for real blood! As Mom rushed me to E.R., I had three revelations:

Decades later, Cheryl found me on Facebook. How she remembered the name of the hulking 6-year-old pirate who played with her when she was 2, I have no idea. But she did. Hence, her friendship, not Stevie’s, is now officially my longest-running. And the adventure continues…

I have the scars to prove it!

21 Responses to My Scar Stories