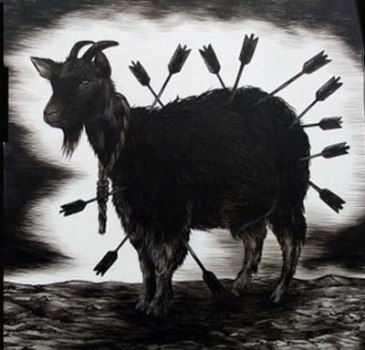 Scapegoats were the animals the ancient Hebrews laid their hands on in order to cast away their sins. It was a symbolic act, meaning, “I’m ashamed of the evil in myself and I publicly disown it.” The key to healing was humility: “The goat is innocent, I am not.”

Modern scapegoatists, however, live in denial of their sins, insisting that the goat is to blame. They punish others for what they cannot bear to acknowledge in themselves. The Nazis blamed the Jews. Omar Mateen, who murdered 49 people in an Orlando nightclub, blamed gays for his failure to overcome his own homosexual desires and live according to his Muslim beliefs.

James Fields, the 20 year old who plowed his car into the opposition crowd at a Virginia white supremacist rally, is a modern scapegoatist. Since his early teens, he has attacked his invalid mother for suggesting he break his escapist behavior patterns. He has been a devout follower of Hitler, insisting that white Americans’ failings (and his own) are the fault of others, in this case African Americans. But he’s only one example. The “white nationalist” movement is Fields’s denial writ large.

Just as it did before World War II, scapegoatist nationalism is moving from backrooms to public squares: In the Middle East, in Asia, in Europe and America.

What can we do to stop it?

We can stop blaming our own “goats.” We can be transparent about our sins, economic, moral and otherwise. We can admit to bullies and other agitated souls that we are no more naturally virtuous than they. We can live lives of repentance and renewal, giving others implicit permission to do the same. We can show that it’s not only OK to fail publicly, but that it’s the first step to moving forward…