Sixty years ago, Johnny and the Moondogs changed their name to The Beatles (good call). I first heard them 15 years later, when they exploded onto the American airwaves. But it wouldn’t have happened without the Fifth Beatle.

It seems so silly now, but as a kid growing up in sunny SoCal I had a dogged loyalty to our locally grown Beach Boys that required me to “hate” The Beatles, those foreigners with goofy haircuts. I was also absurdly jealous of the adoration they got. From, you know, girls. Duh. As if any other kind of adoration mattered.

Then I heard the opening chord of “A Hard Day’s Night” and I fell in love. I didn’t know it then, but the cupid behind my crush was an unassuming genius named George (eventually Sir George) Martin, the producer who relentlessly pushed the Beatles to try new things, including that impossibly addictive opening chord.

Like a knight, Sir George rescued the maiden Beatles from obscurity as “one-time pop idols,” dragging them off to his castle-slash-recording studio at Abbey Road, constantly insisting they push themselves beyond the easy to the unimagined, the untried. The immortal.

When Paul McCartney brought in his wrenchingly beautiful song “Yesterday,” Sir George wrote a string accompaniment that supported the melody like the shell supports 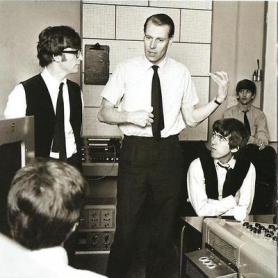 Botticelli’s Venus. “But we’re a band,” Paul said, “we play drums and guitars.” “Just give it a try,” the impetuous knight cajoled.

Sir George played the baroque piano solo on “In My Life.” Wrote and conducted the heartbreaking double string quartet behind “Eleanor Rigby.” Added that adorable piccolo trumpet to “Penny Lane.” Layered and orchestrated the unforgettable closing of John Lennon’s “A Day in the Life.” And on and on and on…

But in a way, the Beatles also rescued George. He was a knight without a quest, a formally trained musician producing spoken language recordings, until a disheveled group of working class geniuses from Liverpool walked into his rented castle. Together they produced a body of music that transcended their individual talents–a collaborative miracle.

Paul called him the one true “grown-up” in the Beatle’s lives, their “second father,” and “the fifth Beatle.” To that, I would add that Sir George was the divine cupid who made everyone–including me–fall in love.

George Henry Martin passed away three years ago, but the music he and the former Johnny and the Moondogs created is as memorable as Beethoven, who (with Chuck Berry’s help) they advised to “roll over” and make room for them among the immortals!

19 Responses to The Fifth Beatle