The Most Memorable Year of My Life 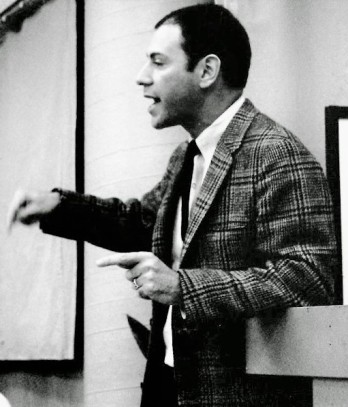 Not until my wedding, 21 years later, did I have another year that was so packed with personal memories. I’d fallen in love with music just as the Beatles and ensuing British Invasion hit, and started learning to play the guitar; installed myself as our junior high school’s prince of drama (and a more ill-suited royal you’ll never find); appeared in my first motion picture; kissed a girl; graduated from junior high school; met my first real girlfriend; gone on the most epically disastrous trip in human history; and said a fond farewell to my childhood.

And the year wasn’t even over yet!

I found my tribe (in current pop-speak) the day I started high school. La Mirada High was hubbed around a quad with offices on one side, an aggresively “efficient” cafetorium on another, then classrooms and atheletic fields, and finally a hexagonal library building, which included my new tribal home…

A piece of pie with its tip bitten off, The Drama Room had tiered seating on the “crust” side and a wedge-shaped stage at the other. It had been designed as a flexible theatre space. But the previous English-teacher-with-a-side-of-drama had used it only as a classroom, preferring to stage long, talky plays in the Cafetorium instead. While still in junior high, I’d seen two of these and been sorely disappointed. But by the time I arrived…

So had the new drama teacher.

Mr. Baker was a short, pudgy force of nature. Like my seventh-grade teacher Mr. Baxter, Mr. B 2.0 was a pro. He’d directed and acted professionally, and, like me, had even had a small role in a movie about juvenile delinquents; only, unlike me, Mr. B actually had lines, and unlike my long-forgotten Z-picture, that film The Blackboard Jungle (which introduced the world to Sydney Poitier) is considered a classic.

To promote drama, Mr. Baker created two tools: The first was Drama 64, a recurring guest speaker event featuring our teacher’s famous friends, including Academy Award-winner Alan Arkin and Mr. B’s old starving-actor-roommate-turned-Emmy-winner Robert Vaughan, star of The Man From U.N.C.L.E. Dr. Kildare-heartthrob Richard Chamberlain was also slated to appear but, afraid of being mobbed by teenage girls, chickened out. The other event, Noon Theatre, featured free lunchtime entertainment with, among other things, previews for our upcoming plays. It was a brilliant success:

Our first production, Out of the Frying Pan, a rom-com about a secret romance between co-ed Broadway-wannabes, sold out and had to be extended for a second weekend. And, in another unprecedented move, Mr. B. gave the comedy lead to a mere freshman (me). On opening night, I died and went to ham-heaven. The audience was starved for laughs, and I was the main dish!

Almost overnight, our high school productions became front page news, sometimes even crowding out the latest football game, and the wildly talented Doyle Baker became La Mirada’s resident celebrity. But he was more than that to me. He was the man who got me, who was me in many ways. He was my Mentor and friend. There would be dark days in the future (for both of us). But not that year. That year was…

The most memorable year of my life.

48 Responses to The Most Memorable Year of My Life