The Day the Movies Came to Me 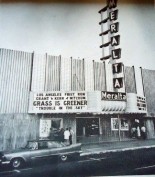 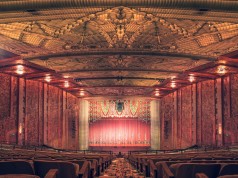 I was born loving movies–it’s in my DNA (Mom loved all kinds of movies, along with books about movies, Dad loved action flicks, especially sci-fi). I was even named after a movie character, “Mitch” in the long-forgotten City Across the River, featuring a then-unknown actor Tony Curtis in his film debut (“He was really cute!” ~Mom). My parents saw it just before I (Mitch 2.0) made my debut.

I first “went to the movies” at the Meralta Theater in Downey, and it was there my addiction began. I saw Gone With the Wind there. And The Wizard of Oz (“Why is it in black-and-white, Mom?” “Shhhh, you’ll see, honey”). And Tammy and the Bachelor. And Old Yeller. It was a humble neighborhood bijou, but it introduced me to that magical device, the movie projector, as well as my first musical hero Sam Cooke. When we wanted to see a big “road show” movie, we’d go to The Paramount, LA’s golden movie palace. I saw Spartacus and The Ten Commandments there.

I honestly can’t remember a time I didn’t “go to the movies.” But now let me tell you about the day the movies came to me!

When I was seven, we moved to the sqeaky new suburb of La Mirada, a cinema-deprived island. So we drove through scary Dairy Valley to the Lakewood Theatre. Or to the spectacular three-projector Cinerama Theatre in Hollywood (eat your heart out IMAX!). Or to Grauman’s Chinese, where I dreamed of someday imprinting my feet. Or to the Fox Fullerton where Mary Poppins almost convinced me I could stay a child forever.

But on December 21, 1962 — just in time for Christmas, as if by divine fiat from Charlton Heston himself — “the movies” came to me! Right there in dinky little La Mirada, in midst of that vacuum tube-obsessed era (television), the La Mirada Theatre became the first new movie house to break ground in the U.S. in a decade!

Opening with the world premiere of the biblical epic Barabbas (its titular star Anthony Quinn arrived in a rocket-finned limo), our new theater was a glitter-stucco gift from heaven! From then on, I saw nearly every movie they screened: from Lawrence of Arabia to Beach Party to A Hard Day’s Night. Every 50¢ Saturday matinee featuring Godzilla or some Godzilla wannabe and every Three Stooges pratfall ever captured on film—two of the Stooges even made a live appearance one Saturday afternoon!

I still remember leaving the La Mirada Theatre after seeing Hitchcock’s nerve-pecking classic The Birds. Just as the jittery, tightly-packed crowd pushed out through the glass lobby doors, a popcorn-seeking seagull dove down under the overhang — and 500 people ran screaming back into the theater!

I still “go to the movies” at my local cineplex. What it lacks in nostalgia (or glittered stucco), it makes up in recliney seats and booming surround sound. And my heart still speeds up a bit when the theater lights dim, just like it did…

The day the movies came to me!

61 Responses to The Day the Movies Came to Me