My Brief but Glorious Career as a Monster 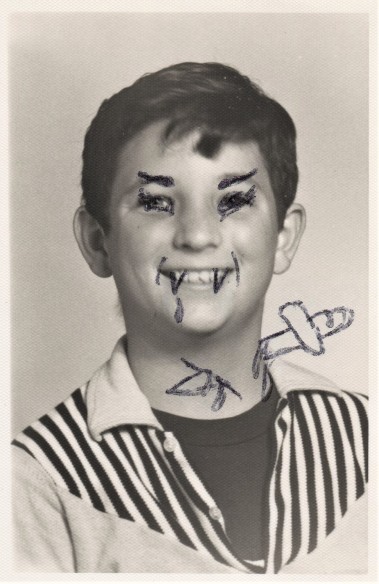 Monster Me (photo enhanced by me, age 11)

I’ve admitted before my boyhood affection for monsters. No, more than just affection, from Dr. Frankenstein’s befuddled electro-charged jarhead to that ultimate pound puppy, the Wolfman, I empathized with them. So, once I got old enough to say no to Mom’s “you’d-look-adorable-in-this!” costume suggestions, I chose every time to be a monster.

But the rules changed when I started junior high school. Two months into seventh grade, Halloween arrived. I desperately wanted to be hideous, yet teenage culture decreed that trick-or-treating was “for kids,” and I wasn’t cool enough to be invited to any costume parties. So where and how could I be monstrous? It wasn’t the candy I wanted, it was the costume. I longed to recoil in horror at my own hideous countenance in the mirror!

Finally, Rory and I came up with a solution: We would distribute candy…as monsters! We set the scene by placing a folding table in the entrance to my family garage, leaving a shadowy grotto in the background full of instruments of terror—brooms, shovels, an old vacuum cleaner (hey, everything’s scary when the lights are low), and festooned the room with kite-string cobwebs. I hung an elbowed segment of air duct pipe from the rafters and backlit it with a red bulb. The pièce de resistance was a large pitchfork hung precariously over the entire scene. Et voilà, the creepiest candy distribution center ever!

Rory sat at the table, oozing Miracle Whip from eyebrow-pencil wounds. I loomed in the rafters, twisted and menacing. As assorted Tinkerbells and Daniel Boones arrived, Rory would greet them with a black-toothed grin, pound the table, and call, “Eeee-gorrrrrr!” From above I would groan, “Yessss, master!” and drop candy down the pipe. Then, as a quivering seven-year-old palmed the candy, I would leap down, cackling maniacally (as if there were such a thing as non-maniacal cackling), and the timorous tot would run off giggling uncertainly, clutching a fistful of squished chocolate.

It was the greatest Halloween ever! Until, along about kid number forty-six, something went monstrously amiss. I jumped down, admittedly a little over-zealous, to scare a particularly cocky kid, causing the rafters to rattle with gusto. This, in turn, inspired the pitchfork to vibrate with verve, leap free from its tiny picture-nail hook, and plunge with zest into my bare foot below. I still recall the sound of the tines pushing their way between my meaty midfoot metatarsals and striking the concrete beneath!

The E.R. waiting room was full of mutilated pre-teen monsters just like me! Thus did my brief but glorious career as a monster come to an end. The following year I attended my first official teenage costume party dressed as a beatnik with a beret, stick-on goatee and bongos…

And not a pitchfork in sight.

36 Responses to My Brief but Glorious Career as a Monster