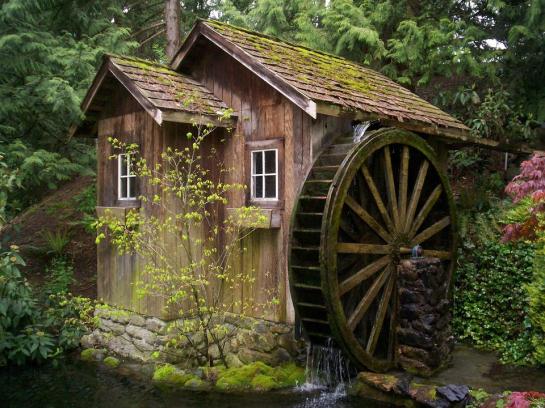 While Zack was on his way back to Ismara to search for his sister, she was busy adopting a baby dragon and facing down an angry conclave of pixies! Meanwhile, in a village nearby…

It had been almost a year since B’frona the Miller’s son had befriended Prince Jenblevó, heir apparent of the South Frengan Pixies. After his father’s accident, and despite his young age, B’frona had been forced to learn how to funnel, dress, and balance the stones by himself, and to take over the day-to-day operation of the gristmill. He hated it, but he was good at it, better, in fact, than his perpetually drunken father had ever been.

One night he’d awakened to the sound of the waterwheel turning and the stones grinding. He’d tiptoed down to the millhouse and there in the moonlight found Prince Jenblevó and his cohorts attempting to grind lespin nuts. Being unable to carry more than a single nut at a time, and in constant danger of being crushed themselves, the pixie youths were failing miserably, and cursing loudly.

To their astonishment, the lonely boy volunteered to do the grinding for them. After adjusting the rynd and runner stone, he loaded the nuts and began to produce a steady stream of the damp, pungent lespinell the pixies adored. It was the largest amount the pixies had ever seen. Prince Jenblevó immediately swore “immutable amity forever!” to the boy miller.

So now, after nearly a year of immutable amity, B’frona was making his way through the forest in the early morning light, a bucket of lespinell in one hand and a pinewood staff in the other. His heart was lighter than usual, for he was going to see the pixies, the only friends he had. He picked his way between the golden lespins and towering pale irontrees, exulting in the ginger-rose glow of dawn.

B’frona finally arrived at the Sacred Circle. What he saw, however, was not the familiar ring of standing stones and waiting pixie delegation, but the remains of a toppled temple and the feet of a giant, or rather the feet of a human girl—for a boy accustomed to the world of the Fae (the faerie realm), she seemed immense.

This was followed by two other shocks: first, the girl was curled up with a dragon hatchling—this infuriated B’frona beyond what he could bear—and second, she had clearly kicked over the pixie’s Sacred Circle, an act of heinous disrespect toward his friends! Just inches from the prone giantess, a courageous pixie crew was directing team-harnessed squirrels in the transport of temple stones. In an outburst of rage, B’frona began kicking the irreverent interloper…

Thoughts: Have you been outraged at a stranger’s disrespect for your friends?