The Man Who Would Not be King

An ancient document had predicted “the Time of an End and a New Beginning“ when Strangers from another world would choose between salvation or destruction. There was one who knew more about this than anyone else…

The double moon glowed as if lit from within. It gave off an ivory light like an old lampshade. Its exact match resided in the ivory-haired old man who’d left his bedchamber to meditate in the moonlight. Melcarhassen, Prime Regent of Ismara, was thin but sturdy for someone of—well, no one really knew what age he was, only that he’d ruled the Ten Kingdoms of Ismara since their beginning.

A few Sheyar, the great birds that dwelt high in the Northern Mountains, remembered The Time Before. Aviar, their undisputed leader, and one of Melcarhassen’s fiercest allies, remembered and nettled his feathers at the recollection. There’d been chaos and war. And before that? Well, the old Holosian god-emperors had simply dropped those who disagreed with them into the mouths of thousand-toothed Hadessian dragons.

But Melcarhassen ruled with compassion and humility. He considered himself no better than the least Ismaran, and would have died for any of them. They all knew this and loved him for it (or nearly all), and for this reason Aviar had pledged to stand against anyone who would try to supplant Melcarhassen.

The sleepless Regent stepped into a courtyard that was a hundred feet across and filled with stones interlaid in the pattern of triangles within circles. He leaned against one of the magnificent rainbowwood pillars.

Lake Zshinia, Ismara’s vast inland sea, the most beautiful body of water in the world, slept curled up six thousand feet below, the double moon reflecting off its surface. A delicate breeze blew up from the Lake, stirring the edge of the old man’s tunic; despite his title, he still wore the garb of a Zshinian novitiate.

His skin turned bronze in the moonlight as he lifted the brittle scroll and began to read. It wasn’t age that caused his hands to shake, but wonder, the same wonder that had awakened him deep in the night and compelled him to search the Scrollary for the Introduction to the Anaruols. The old man knew what it said—he’d read it a hundred times—and yet he hoped it would say something different this time.

He’d heard reports of a mysterious stranger, spotted first in Alzun, then Ongoltan, and most recently in Holos. Mysterious strangers were common, of course, and there was no reason to assume they had all been the same person.

Except that each of them was described as wearing an extraordinary helmet made of shimmering amarrildin, the enigmatic purple-gold ore that only a handful of metalsmiths had ever mastered, and covered in intricate etchings and priceless Krettian fire petals. Which matched perfectly the description of the prophetic Helm of Knowledge.

“Oh, Uol…” Melcarhassen began, not in the “reverent” tone most use for prayer, but in the way one speaks when they are pouring out their heart to their closest friend. He sighed as he looked out on the far shores of Lake Zshinia. “Oh, Uol…is it time?” And then, as if in answer, and while the double moon watched…

Thoughts: Even Jesus prayed to be spared the terrible ordeal that was before him (Matthew 26:39). Have you ever faced a trial you knew you must go through, yet hoped to find a way around? 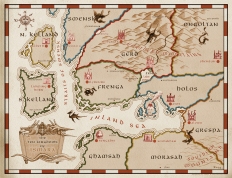 6 Responses to The Man Who Would Not be King