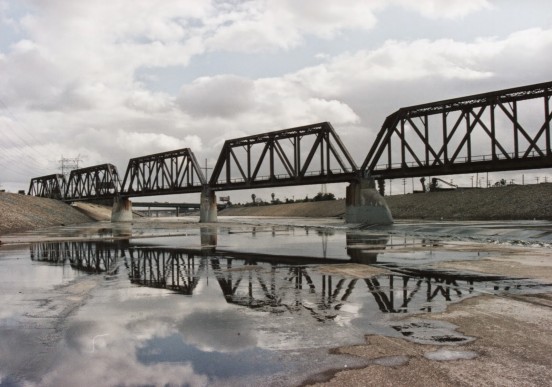 (Heads-up: this was one of the darkest experiences of my life)

My parents loved visiting their old friends Don and Gina. Which left their only child Craig and me to “play” together. Craig was almost two years older, and a relentless risk-taker, so I frequently refused to follow his lead. And he considered me something of a pantywaist. Still, we hung out together because, well, what else was there to do while our parents visited?

Craig had an ardently devoted pet, a shepherd-mutt mix named Rusty, who went wherever Craig went. So when Craig headed for a nearby urban L.A. riverbed, Rusty was right at his heels.

Craig led us to a railroad trestle and climbed unhesitatingly up onto it, followed by Rusty and me. We’d barely arrived when we heard the blare of a diesel horn. A freight train was moving toward us at high speed. And then Craig dared me:

“First one to jump is a chicken!”

I was the chicken. A moment later, Craig made his victorious leap to the riverbank. But Rusty was afraid. Craig shouted, “Come on, boy!” Rusty whimpered, fearful of the drop. “Rusty, jump!” Craig yelled. But Rusty just stood there whining.

And then the train struck. It hurled the frightened dog between the steel beams and onto the riverbank twenty feet below.

Craig ran to him. Rusty was panting hard, bleeding profusely, and barely conscious. Craig gently scooped him up, weeping bitterly, and carried his best friend home. I followed, crying and unable to stop my legs from shaking.

There was a vulnerability in Craig I’d never seen before—and never saw again. The veterinarian amputated Rusty’s tail and re-set his hip and leg, but infection set in and Craig’s faithful companion died a week later.

I’d like to say Craig changed after that. But he didn’t. A few years later, on a dare, he and two other teenagers got drunk and raced across town in a convertible. All three died. I don’t know how I knew, but the moment his mother called our house, I knew. I didn’t know how to pray back then, but I do now, and I’m praying for each of the people involved as I write this.

Craig’s parents split up the following year. Decisions don’t occur in a vacuum, they send ripples into lives far beyond what we can see, and up close those ripples can be tidal waves. It was my first personal brush with tragedy.

I might have slipped past the panic. But a month after the incident with Craig’s dog, I had another train encounter that completed a one-two punch to my pre-adolescent psyche. Was it a precursor to the anxiety I would later experience as an adult? Maybe, I don’t know. Or maybe my brain was simply trying fear on for size. Our minds are like that. Fear is always a possibility.

But so is the overcoming of fear.

34 Responses to I Dare You