The Last Kid on Earth

Posted on October 9, 2021 by mitchteemley 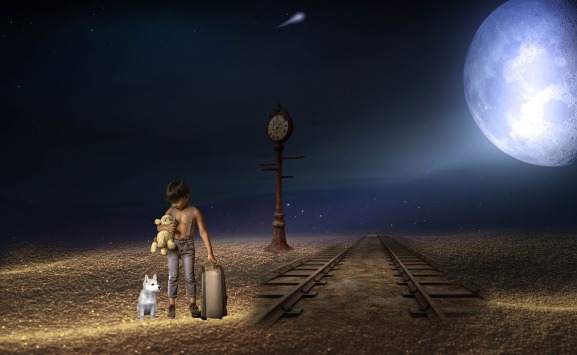 The double moon that had settled over Middleton was truly mysterious. And yet Casey and Michael, Zack’s two fast-fading friends could care less. They’d turned thirteen, and were only interest in being teenagers.

In an effort to revive the spirit of play, Zack exclaimed, “Why, Doctor Merriweather, Doctor Farquhar, I am shocked at you! Can you not see that something is monstrously amiss? Do you not realize…”

He waited for them to chime in with a dramatic, “Yes, Doctor?” His best friend Arman would have picked up the cue in a flash, but Arman wasn’t here. A fleet of trucks could have driven through this pause, with a stop for pie and coffee along the way. “Do you not realize,” Zack continued, “that behind what appears to be a mere blurry moon lurks a planet-sized alien mother ship preparing to annihilate the earth!!!” Zack followed this chilling revelation with his long-perfected musical sci-fi movie sting: “Wrrrrrrrrrrrrrreeeeeeeeeeeeeeeeeeeeee!”

Michael leaned in, conspiratorially. Zack brightened and leaned in to meet him, but this was not the face Zack had known since fourth grade:

“I told you, we’re not doing that kiddy crap anymore, Dore.”

“Yeah,” said Casey, and then, unable to think of any actual words, he leaned back and repeated, “Yeah.”

“So, my brother got his license,” Michael reported, “and he’s gonna buy this awesome dark black roadster.”

“Excellent!” said Casey. “He should get it with triple turbos and a fuel-injected muffler.”

Zack’s temper was bubbling, but he lidded it with a playfully mocking, “Why, gosh and golly, I hear that’s a superb little roadster, fellow teens!”

Casey started to nod, but Michael shook his head, as if to say, “He’s making fun of us, you dope.”

The silence between them began to congeal.

Zack made one final desperate effort to resurrect their collective childhood: “So, you guys want to sleep over? We could pretend we’re—”

“Hey, Christy!” Michael shouted. But Christy Miller, a gorgeous soon-to-be ninth grader, was unable to hear him due to the fact that she now existed on a different plane of reality. Michael grinned—as if acting like she’d noticed him could somehow make it true. He turned back to Zack and said, “Time to grow up, Z-boy.” And without another word, Zack’s suddenly ex-second-best-friend hurried off after Christy Miller. Casey was disoriented until Michael glanced back and cast him a look-hook, which he gratefully swallowed and got reeled in.

As Michael and Casey grew smaller, Zack pushed the hair out of his eyes and hollered after them, “There’s no such color as ‘dark black!’”

He was painfully aware that he now had only one friend left in the world, and that friend was eight thousand miles away in Armenia. Arman and Zack had talked on the phone just once since then, and Arman had sounded annoyingly happy: “Zack, it’s really cool here…they drink this really sweet tea…it’s really good and…I kissed a girl!…her name is Maryam…she’s the only person in the village I’m not related to…she likes Mickey Mouse and she’s really…” Then the phone had made strange noises and gone dead.

Suddenly the whole world seemed to be making strange noises and going dead.

Zack had never felt more alone in his life.

8 Responses to The Last Kid on Earth