Posted on September 9, 2021 by mitchteemley 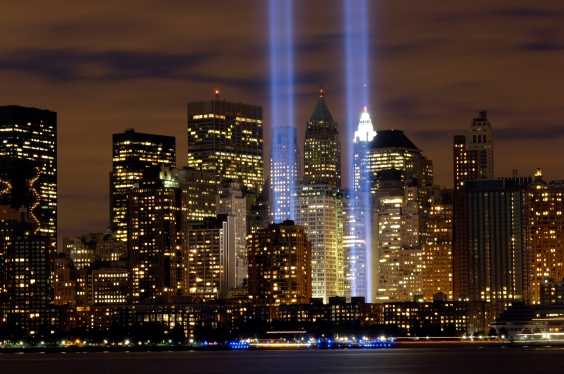 September, 2001, was a tumultuous month for my family. We’d sold our Orange County condo, the only home our children had ever known, and on Labor Day moved into a rented townhouse in Burbank, California. The next day I would begin teaching filmmaking at the L.A. Film Studies Center, in the shadow of the iconic Warner Brothers water tower.

The heart of the school was the Media Room with its curtain-cloth couches and theater-sized TV. It was there that the students coffeed each morning. The screen was always on, usually playing someone’s favorite movie. But for some reason, when I walked in on September 11th it was fixed on the New York World Trade Center. A newscaster was recapping the tragic airliner “accident” that had just occurred. But then, as we watched, unable to process what we were seeing, a second jet crashed into the other tower. And then, like a special effect from one of the movies we studied, the towers fell.

Four days later, my wife and I celebrated our anniversary at a restaurant overlooking the smoggy bedspread of the San Fernando Valley. In another four days, my wife’s father would pass away suddenly and unexpectedly.

Nothing seemed certain anymore. Before 9/11 we’d fallen, as people always do, into merely living. But 9/11 reminded us, as death always does, that life must not be taken for granted. By 9/12 we were remembering what life was for again.

We mustn’t forget 9/11, but neither must we live there. 9/11 was about death. 9/12 is about life. To live in 9/11 is to honor the killers who carved the date into our hearts, to focus, like them, on revenge and on eliminating “all of our enemies.” But enemies can never be completely eliminated because the very act of eliminating enemies always creates new ones. Always. It’s a hideously efficient birthing process.

And now, twenty years later, we find ourselves in an eerily familiar situation. Even while the Taliban and a reemerging Al Qaeda retake Afghanistan; and even while other ideological extremists battle for ruthless control over multiple regions–an invisible killer stalks every person on the planet. But now, just as then, we must strive to be the offspring of 9/12, not 9/11, to be about life, not death…

To remember what life is for again.

“I have set before you life and death, blessings and curses. Now choose life, so that you and your children may live.”

Writer, Filmmaker, Humorist, Thinker-about-stuffer
View all posts by mitchteemley →
This entry was posted in For Pastors and Teachers, Memoir, Quips and Quotes and tagged 2001, 9/11, choice, death, life, September, Taliban. Bookmark the permalink.

63 Responses to 20 Years Ago Today