The Sky Goes All the Way Down! 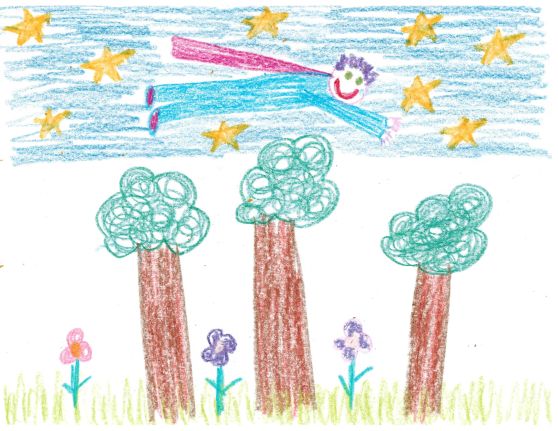 I’ve always been a little, you know, different. School had resumed and it was Art Time. We were supposed to color what we saw out the classroom window. The view wasn’t particularly spectacular. There was a big old tree of the genus Big Old Tree. And there was a honeysuckle-covered fence, the ground next to which was littered with “used” flowers, drained of their tiny nectar rewards.

Everything else was sky. Which every kid knew meant coloring a band of Sky Blue along the top of the page. But, wait, I thought, that doesn’t make sense. So I went to the window and looked out. And you know what? The sky didn’t stop at the top! I followed it all the way down in order to scientifically verify my findings. Sure enough, it went all the way to the ground!

I yanked two kids out of their seats and dragged them over to the window. “Look! The sky goes all the way down!” They looked at me, and then gently explained:

“Yes, it does! Remember, Mrs. Peavey said it’s made out of the same stuff we breath!”

“It can’t be,” they replied, “it’s the wrong Crayola color.”

Actually, the air down here didn’t seem to be any Crayola color. “Well, it gets all see-throughy,” I reasoned, “when it gets to us.”

They had a point. And yet… “But look!” I pointed out the window again. “It goes all the way down!”

That was only half as radical as the day I drew a house on fire. I knew that fire was supposed to be Red. But I was tired of drawing it that way. So I drew Green fire…and Red water coming out of firehoses. Then I laughed.

Mrs. Peavey took me to the school Counselor, who called my mom to see if everything was OK at home. “Yes,” Mom explained, “he’s just a little, you know, different.” The Counselor agreed.

So Mrs. Peavey put my picture up with all the others in time for Open House. But I think she got a little tired of explaining to the parents, “Oh, that kid? Yes, everything’s OK at his home, he’s just a little, you know,

19 Responses to The Sky Goes All the Way Down!