Posted on January 5, 2021 by mitchteemley

My first musical hero died this week. In fact, given the role music has played in my life, it would be accurate to call him one of my first heroes, period. Gerry Marsden of Gerry and the Pacemakers, along with The Beatles, helped lead the 60s British music “invasion.”

By the time I fell in love with guitars, solid-bodied surf guitars (“planks”), were passé.* Amusingly, the British bands favored the bigger, semi-hollow-bodied pre-surf guitars of their heroes, 50s rockers like Elvis and Chuck Berry. 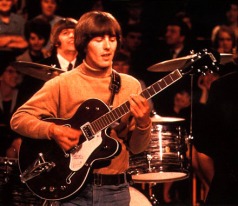 Everyone was copying The Beatles (as did I a bit later), so I copied Gerry. Gerry played a big, boxy Gretsch guitar way up on his chest. And that, to me, was the epitome of cool. So when I bought my first electric guitar, it was a Gretsch—just like Gerry’s. And I played it way up on my chest—just like Gerry. Although later I had to lower it because, frankly, my arms were longer than Gerry’s. (My best buddy Marc bought a Gretsch–just like George Harrison’s).

Gerry and the Pacemakers aren’t icons like The Beatles (only the Stones and The Who come remotely close to that). But for a time they were The Beatles’ biggest rivals with catchy, feel-good rock ‘n’ roll in the style of their hero Buddy Holly (whose band The Crickets inspired The Beatle’s name). The Pacemakers were the other big group in Liverpool’s “Merseybeat” music scene. They had the same manager and the same producer. In fact, Beatles’ producer Sir George Martin championed them early on and created the stirring string arrangements behind Gerry’s haunting ballads “Don’t Let the Sun Catch You Cryin’” and “Ferry Cross the Mersey.”

Although Gerry grew up a generation earlier than me, and 5,000 of miles away, we shared the same Irish-English background and the same deep, wistful longing for home. I was almost too choked-up (almost) to join in with Gerry as he sang in his lilting tenor about coming home, in the movie Ferry Cross the Mersey (see video above):

So I’ll continue to say
Here I always will stay

Gerry is home forever now. Beside the Mersey. And in my heart.

26 Responses to A Hero Comes Home