Posted on December 1, 2020 by mitchteemley 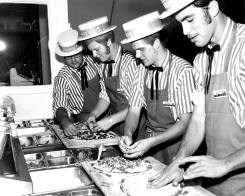 It’s been called the world’s most perfect food. Why? Apparently, because it includes every taste and texture we crave, all in one dish: sweet, savory, chewy, crunchy. Oh yeah, and cheese, tons of cheese. What’s not to love? And yet, when I first tried pizza I didn’t like it. My primitive kid-buds preferred squishy-sweet Chef Boyardee spaghetti out of a can. But a million new taste receptors later, I tried it again again, and loved it.

By the time I was in high school, 19th century beer-hall-themed “pizza parlors” had become a thing (go figure). They had communal tables full of people singing along to tack pianos. And big, thin, crunchy pizzas, along with foaming pitchers of soda and beer. Pizza parlors were tailor-made for groups, too. Birthday parties, girl scouts. Or, in our case, high school drama geeks.

We’d just finished opening night of the anti-racist musical fantasy Finian’s Rainbow. In it, I played Og the leprechaun, and my buddy Mike played the leader of a black gospel group. Just for fun, we decided to go to the cast party at our local Pizza Parlor in costume and make-up.

Our little suburb had no black people. So Mike, whose Greek heritage and nearly-African-American hair-itage were the closest thing we had, got the part. With the right make-up he actually made a rather dapper black man.

Our little burb also had no openly gay people. So when a black dude and his white, cross-dressing boyfriend—decked out in green eye-shadow and cute, pointy little shoes—walked in arm-in-arm, well…let’s just say the music stopped.

We sat down amid the after-football crowd, who began to rumble. Loudly. But then we got up and moved to the drama crowd table. Our fellow actors roared with delight. Our drama teacher, Mr. Baker, whispered, “Gutsy, boys, very gutsy.” Then he grinned. Loudly.

A few years later I discovered real pizza—thick, chewy, crunchy, tomato-y, and profoundly cheesy–and I fell deeply in love. I began ordering it every Friday night. Whether with friends or alone.

When I got married, my wife became my permanent Friday Night Pizza date. And a few years further on, each of our toddler daughters tried their first solid food on a Friday night. And they too fell in love with pizza. After all, what’s not to love?

I’ll probably be toothlessly gumming pizza when I take my final breath, because, after all…

It’s the world’s most perfect food.