Producing Pearls in My Sleep

Posted on September 17, 2020 by mitchteemley 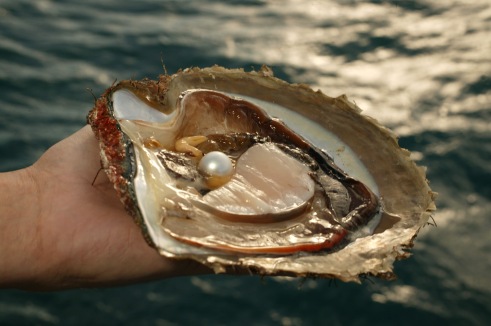 I’ve slept like a rock lately. Which is to say, very badly. (Rocks can’t sleep.) So last night at bedtime, I prayed for blissful oblivion.

So I lay there, amidst the latest installment of forever, trying to calm Brain down. But Brain wanted to fret, and it’s remarkably stubborn when it’s made up it’s, um, mind.

A silent but surprisingly loud voice answered, “Don’t waste your time asking why. Ask what you can learn from this.”

“That there’s always treasure to be found, even if it’s not the treasure you sought. And in the end, who knows, it might turn out to be even more valuable.”

While I pondered this, Brain got interested and tuned in. Then Brain and I wandered from that thought to another, and another, forgetting what originally woke us up, and growing groggier as we went.

I drifted in and out of sleep the rest of the night, but felt strangely peaceful when I awoke. I was thinking about pearls.

Pearls are unique among gems. They begin with an irritant, a worthless thing, and then grow more-and-more valuable. The Oyster coats them with its nacre (“mother-of-pearl”), its tears, if you will. But unlike the irritant, nacre is beautiful. It’s the Oyster’s essence, what it’s made of. And as layer after layer of the beautiful substance is added, the pearl itself becomes more and more beautiful. More and more complete.

I’m still kind of tired, but now I’m pondering how I found a fresh way of coping. I followed one image after another into a peaceful calm that was even better than a night of mere oblivion. I found…

A more valuable treasure than the one I sought.

“Consider it pure joy when you encounter trials of various kinds, knowing that the testing of your faith produces perseverance. And perseverance, when it has finished its work, is the one thing that can make you mature and complete, no longer lacking in anything.” ~James 1:2-4

27 Responses to Producing Pearls in My Sleep