Votes for Women? Yes. But Why? 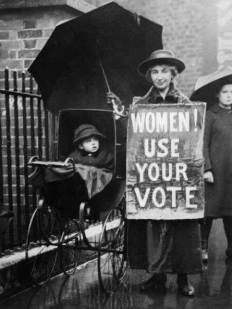 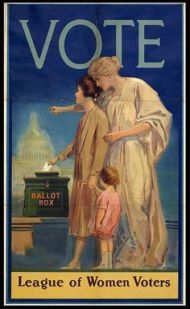 It seems an odd question to ask in our enlightened era (as if). But it’s worth asking this year, because in my country we’ve just celebrated the 100th anniversary of a woman’s right to vote, and every year on Women’s Equality Day. But more, it’s worth asking every day. Why? Because women will always be equal.

Historically, most adults married and produced children. The larger, more aggressive male provided food, protection and shelter, and the female provided the nurture, comfort and love that makes a shelter a home. So the idea of freedom became tied to the family unit. As a result, voting, even now a historically new phenomenon, was viewed as a family right. The man, the defender of the family, would represent not only himself but his entire family unit. Single men were exceptions; they could vote (call it practice), but were expected to become heads of households as soon as possible. And single women were expected to move seamlessly from their parent’s households to their own, in each case represented by the male “head” of the household. Ideally, first their father, then their husband, would be noble of character and sacrificial in putting their wives and children’s needs before their own. An honorable man would vote in such a way that his wife knew he truly represented her.

But it didn’t always–or even usually–work that way, the suffrage movement argued. Instead, men too often abused their authority. Because, as Lord Acton famously observed, “absolute power corrupts absolutely.” This painful reality was the basis for the wisely-designed “check-and-balance system” instituted by my country’s founders.

But in the home, or for unmarried women, no such check-and-balance system existed. The Bible is profoundly clear-headed about this reality: “For everyone sins and falls short of the glory of God (what they were created for), and there is no one who consistently does what’s right–no not one!” (Romans 3:23 and 3:10).

So I celebrate the equality of women (and others) today and every day. But I’m also not deluded. Yes, we all have, or ought to have, equal rights. But we have yet to learn to use those rights in the right way. We must learn to use our freedom to serve something far greater than ourselves. Only when we do…

Will we all be truly free.

Writer, Filmmaker, Humorist, Thinker-about-stuffer
View all posts by mitchteemley →
This entry was posted in For Pastors and Teachers, Quips and Quotes. Bookmark the permalink.

20 Responses to Votes for Women? Yes. But Why?