Running waist deep through the wildflowers…

But enough about my front yard. 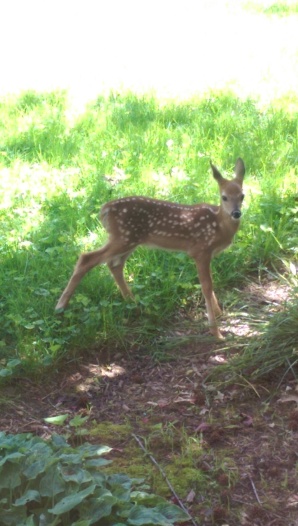 Things do spring forth in the spring (I myself sprang forth on a May day such as this). But I can’t remember another spring when we’ve seen so much growth! Just yesterday morning we found this adorable little sprout in our backyard (photo), patiently waiting for dear Mama-deer to return and fetch her from our ad hoc nursery. We anxiously watched through our window as the rain drenched her–twice! What can I say? We’re humans, and parents at that, so “Flora” (my wife’s name for her) quickly became our deer. Until Mama-deer came (we think, hope) and fetched her sometime after darkness settled in–15 hours later!

Some “wildflowers” aren’t welcome, of course, like the aforementioned weeds in our front yard — which I’ll tackle right after posting this, I swear, honey.

And then there are human weeds, like the internet trolls that sprang up last week and attacked my newly-released feature film Healing River, even though they hadn’t seen the film (!), ranking it briefly with the worst movies ever made! Despite the fact that it has receive rave reviews at film festivals and at Amazon Prime (see below) by people who’ve actually seen it!

But you came to the rescue! So thank you, dear friends (deer friends are sweet, but dear friends are sweeter). When I complained about the Attack of the Trolls many of you rushed to IMDb to add your own corrective ratings. The rating has been slowly climbing ever since, gradually countering the attack of the trolls. However it still needs more true ratings to reach anything approaching an accurate total. So (and this is a total win-win)…

If you haven’t seen Healing River yet:

I’m going to go out on a leafy limb and suggest you’ll be glad this spring thing sprang up. All together now…

The Official Trailer for Healing River

9 Responses to Wildflowers and Weeds