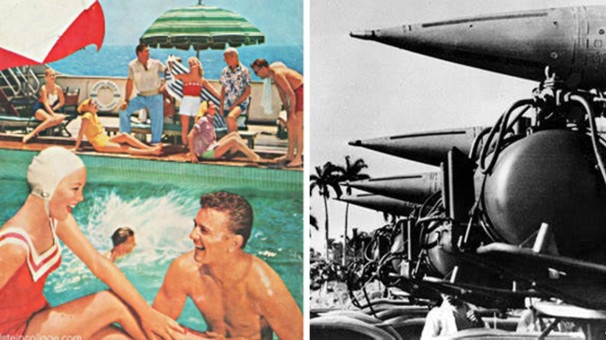 It was autumn, 1962, and (unlike this year) the thermometer was climbing. So was the economy. Dad’s income was booming. To celebrate we’d decided to shoehorn a swimming pool into our miniature suburban Southern California back yard. Visions of bikinied girls and all the spectacular dives I’d make to impress them glided through my pre-adolescent head. We visited half a dozen swimming pool sales lots—they were everywhere in the 60s. Life was good, and soon to be gooder! We found a pool company, appropriately named Aladdin, to make our wishes come true, and were about to close the deal when…

Everything changed. At school we learned to “duck and cover” (because no measly foreign-made atomic bomb could stand up to a well-made Masonite desk!). Dad came home with brochures, and suddenly we were visiting bomb shelter sales lots—

which also were everywhere in the booming 60s. We stepped down into one depressing abyss after another, and were about to close the depressing deal when…

At the end of October, President Kennedy announced that the crisis had ended. He and the Russians had come up with an 11th hour bailout based on the MAD (mutually assured destruction) doctrine. In a nutshell: If you destroy us, we’ll destroy you and then we’ll all be dead and no one will be left to care who started it.

So Dad tore up the bomb shelter lit, rubbed the Aladdin brochure, and soon the sweetest little swimming hole in all of balmy suburban SoCal appeared!

Three days later the least scary Halloween I’d ever experienced arrived.  I’d come to realize that zombies and ghouls were nothing.

It was humans you had to worry about.