Why Is “Smart” Marketing So Dumb? 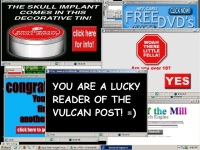 I once read an article about doomsday preacher Harold Camping, who predicted the Apocalypse in 2011 (Update: it still didn’t happen), and for a year after that I received offers to buy camping gear.

I live in Cincinnati, a 45-minute drive from Dayton, Ohio, so when I’m planning to fly somewhere I often check to see if airfares are cheaper from there. Result? I now get updates…every…single…day…on “specials” from Cincinnati to Dayton. Flying from Cincinnati to Dayton (factoring in drive time to the Cincinnati airport, which is roughly the same distance away as Dayton, check-in, flight, deboarding, and car rental): 2 ½ hours.

Ah, but what about the cost? After all, that 45-minute drive to Dayton and back eats up $8.00 worth of gas money! Trip Advisor, on the other hand (the ones sending me the “smart” ads), can fly me there and back for as little as $500!

Are there really $500 (sale-priced) flights from Cincinnati to Dayton? Apparently there are. More to the point: Are there actually people stupid enough to purchase those flights?

Here’s what I’ve figured out: Computers aren’t dumb, people are. On the other hand, there’s a silver lining: As long as computers are programmed by people we’ll never have to worry about a Terminator-style apocalypse. Instead, the robots will show up in 2011 (finally proving Harold right!), buy camping gear, and book $500 flights to Dayton to watch Brazilian nuns play Lacrosse with Girl Scouts from Vermont!

P.S. If you’re seeing this post, it’s because you were strategically targeted due to your interest in “fluff pieces” (down pillows on sale today only!) written “by Mitch Teemley.”

43 Responses to Why Is “Smart” Marketing So Dumb?