To Columbus or Not to Columbus? 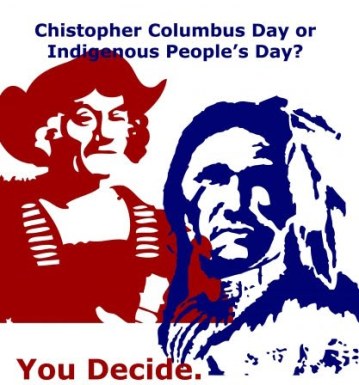 Today is Columbus Day in the western hemisphere (known as Día de la Raza in many Latin American countries, and as Fiesta Nacional in Spain). But as a holiday, it’s toast. And it should be. Columbus didn’t discover “America” anyway, or prove the world was round.

So, who are the good guys and bad guys? Answer: Humans. But our sound-bite-happy mediaverse doesn’t do complexity, so the narrative has been reduced to this:

Old version:  Noble explorers from Europe found a nearly empty world teeming with natural riches and settled here. Oh, yeah, and they encountered a few hopelessly primitive people along the way and taught them how to be civilized.

New version: Evil murdering racists from Europe found a world occupied by noble people living together in harmony, and then tortured them and committed mass genocide against them.

Both narratives are oversimplified. The settlement of the Americas by Europeans was a sometimes good, often heinous adventure. Humans throughout the world at the time wrongly accepted subjugation and enslavement of other cultures as natural, and that informed their actions. Europeans–against their own religious and cultural teachings–murdered and enslaved, but also, in response to those same teachings, sometimes befriended and strove to protect the natives. The indigenous peoples themselves were usually peaceful but sometimes violent cultures composed of individuals, not types, who frequently made treaties with their neighbors, but also sometimes enslaved them.

Swapping one narrative for the other diminishes everyone. Turning Columbus Day into Indigenous Peoples Day reduces all Europeans to murderers and all Indigenous Peoples to victims. It may be too late to stop the momentum, but allow me to suggest something like this:

And everything in between.

34 Responses to To Columbus or Not to Columbus?