“Never Forget!” But Why?

Posted on September 12, 2019 by mitchteemley 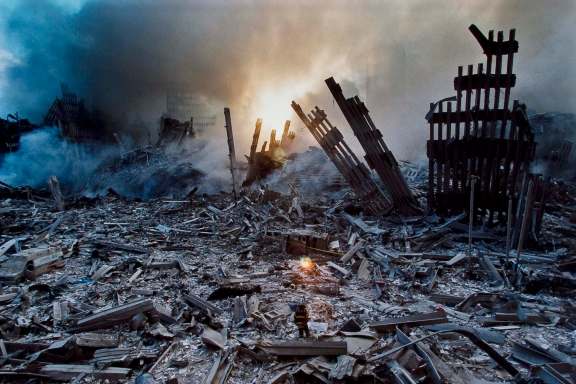 “If stories weren’t told or books weren’t written, man would live like the beasts, only for the day. The whole world, all human life, is one long story.” ~Isaac Bashevis Singer

Yesterday was the 18th anniversary of 9/11, the worst terrorist attack in American history. What’s signifcant about the 18th anniversary? It means that those 18-year-old voting adults who were born after 9/11/2001, and are responsible for determining our nation’s future, have lived their entire lives in the age of terrorism. But what does that mean? Did our world really change?

Before 9/11, I wrote a sample script for the Simpsons television series in which Homer accidentally stops a comically confused terrorist from blowing up an airplane. The script was well-received, but was criticized for being “unrealistic.” Why? Because, I was told, “people don’t blow up airplanes.”

After 9/11, my Simpsons script was unusable, because it was “too real.” Our culture had acquired collective PTSD, as all cultures do after such catastrophic events. People bind together at such times, too, rediscovering what makes them an us, pledging to heal physical and emotional wounds, and vowing to “Never forget!”

But we do forget. Especially the youngest among us who don’t remember the event to begin with. I wasn’t alive when Pearl Harbor was attacked, so it was hard for me to comprehend how, or even that, it had affected my world. But I remember the successive assassinations of JFK, MLK, and RFK that became known as our culture’s collective “loss of innocence.” And it’s true, they were. Something had changed forever. Just as it did on Pearl Harbor Day.

In his book Land of Hope: An Invitation to the Great American Story, historian Wilfred M. McClay (to whom I am also indebted for the Singer quote) says,

“A culture without memory will necessarily be barbarous and easily tyrannized, even if it is technologically advanced. The incessant waves of daily events will occupy all our attention.”

But why does that matter? Because, McClay adds,

“Historical consciousness is to civilized society what memory is to individual identity. Without memory, without the stories by which our memories are carried forward, we cannot say who, or what, we are.”

Those 18-year-olds who live so proudly in the present (just like I did), often disdain the past as irrelevant. And never more than in the 21st century when their eyes and ears are constantly fixed via portable devices to what’s happening right now. This, McClay reminds us, is what novelist John Dos Passos rather bluntly labelled “the idiot delusion of the exceptional Now.”

The past is not irrelevant: It is the foundation (both for good and for bad) upon which our present is built. In other words, it’s a part of our story, not just “theirs.” And if we don’t remember it, as George Santayana famously said, “we are doomed to repeat it.” And that is why we must…

Writer, Filmmaker, Humorist, Thinker-about-stuffer
View all posts by mitchteemley →
This entry was posted in Culture, Quips and Quotes and tagged 9/11, future, hope, memory, past, Simpsons, terrorism, truth. Bookmark the permalink.

46 Responses to “Never Forget!” But Why?