The Waiter from Hell? 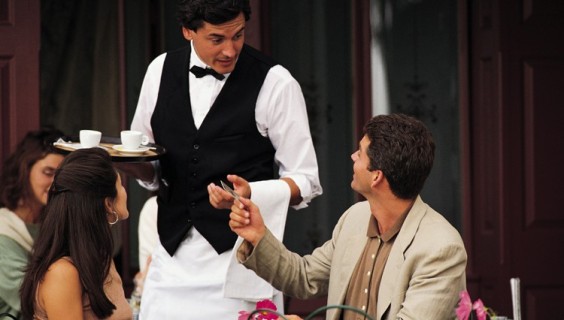 All I wanted from our server was for him to tell us what the specials were, to make a few recommendations, and then bring us our food, quickly and hotly (is that a word?). Instead, he seemed offended at everything, recommended nothing—except that we go somewhere else—and then brought us the wrong food, slowly and coldly. When I complained, he said he’d had it with my attitude. Ahem, my attitude?

A few months later, I told our new roommate my “waiter from hell” story, thinking it might serve as an icebreaker. It didn’t. Dave paid his rent on time, did his dishes, and respected the house rules. In return, all he asked was to not be probed with churlish personal questions like, “Hello.”

When someone is moody I have to know why. It’s probably equal parts snoopiness and compassion, but whatever it is I keep at it. So I kept at Dave until one day he went off like a landmine. All he’d wanted was to be left alone, he said. He’d had it with my attitude. My attitude?

I knew he’d looked familiar when we interviewed him. He was the waiter from hell!

The next day, he told me he’d be moving out. A radioactive fog settled over the apartment (our other roommate Allen hid out at his girlfriend’s house). And then, figuring he had nothing to lose since he’d never see me again, Dave told me his life story. He had two kids…and a wife who’d left him for his best friend just months before he moved in with us, right about the time he turned into the waiter from… Wait, make that the waiter who was going through hell. Every day was like sliding down a razorblade. The only thing that kept him going was his ragged faith. So we prayed together.

Dave never moved out. He did begin to talk, though. And to laugh. And to live. And somehow he became one of my dearest friends (he was a member of my wedding party). 35 years later, he’s still my friend. Dave and I pushed each other beyond ourselves and closer to the God who made us.

When another friend mentioned recently how hard it is to not only forgive but to “forget” offenses, it suddenly struck me that there’s something better than forgetting: there’s redemption. I met Dave under the worst circumstances, and yet those circumstances formed the unique basis for a lifelong friendship. As a result, that memory has been completely transformed. It has been redeemed. It has become…

My waiter from heaven story.

40 Responses to The Waiter from Hell?