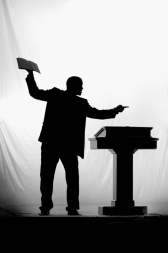 I avoid “Christianese” like the plague. I can speak it fluently, but it’s not my native language. Don’t get me wrong, I’m a bona fide Jesus follower. It’s just that those who speak in code seldom reach anyone but themselves. Still…

When a heart is ready to hear, it can hear in any language.

The Institute of the Arts was a tiny academy offering classes in dance, drama, music, and art. And I was its new Artistic Director. I was too young, but that didn’t matter because I was 20-something and knew everything.

We occupied the middle floor of a three storey building on California’s Pacific Coast Highway. The bottom floor was home to The Church of the Highway.

It was also home to the restrooms.

I stopped by with some supplies the Sunday before we opened, and went downstairs to use the men’s. As I entered the lobby, I heard a painfully un-tuned piano, and peeked through the church’s doorway at Mrs. Potter leading Rev. Potter in a final hymn.

Rev. Potter then got up and welcomed the congregation (Mrs. Potter), led them (her) in a prayer and proceeded to preach loudly and fervently, rolling his r’s and pounding the pulpit, while Mrs. P shouted hallelujahs.

I ducked into the restroom and saw a plaque that read, “Only one life, ‘twill soon be past. Only what’s done for Christ will last” (C. T. Studd). I was not a believer at the time because, as I said, I already knew everything. So I took the plaque down and put it in a drawer.

That was a proclamation of war. Every day Rev. Potter would put the plaque back up. And every day I would take it down. Sometimes several times a day.

Meanwhile, The Church of the Highway was running out of money. A congregation with only one member can’t last forever. Neither can an arts academy with only a few dozen students. Rev. Potter must have been losing confidence.

More and more, my smoke-and-mirrors sense of purpose was beginning to fail. Who was I? Why was I? (I write about it in greater detail here). My foundation of self was giving way and I was starting to fall through to the floor below. So, I started reading the Bible.

One night, after reading the words, “This is eternal life, that they may know you, the only true God, and Jesus Christ whom you have sent” (John 17:3), I rushed downstairs

and pulled Rev. Potter’s plaque off the wall. But I didn’t put it in the drawer. I held it to my heart and recited, “Only one life, ‘twill soon be past. Only what’s done for Christ will last.” And then I cried. Because as corny and religious as those words were, I’d finally realized they were true.

I’ve never doubted my purpose since then.

So thank you, Rev. Potter. Your congregation has two members now.

But you have to get that piano tuned!

28 Responses to Only One Life