So Much to Learn! 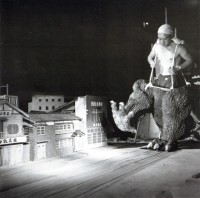 When one of the greatest filmmakers of all time, Akira Kurosawa (Seven Samurai, Rashomon) received a lifetime achievement Oscar, he seemed mystified, insisting that he hadn’t learned enough to deserve such an honor. He was 80 years old at the time. I was only a wannabe filmmaker, but I smiled affectionately at his unwarranted humility.

Now I actually am a filmmaker. And I get it. You never stop learning how to make art, whether classical or popular. Michelangelo and Irving Berlin undoubtedly insisted they hadn’t hit their stride yet when they passed away at 88 and 101 respectively.

Notzilla, my second feature as a writer-director, is slated to begin filming just weeks from now, and I wake up every day unsure whether I’m making a thriller or living one. I’ve already learned a massive amount…about what I don’t know. Notzilla is a spoof of 50s and 60s monster movies—which, when I started, I knew very little about. Decades before the invention of CGI (computer generated images), those films used a completely different set of techniques: rear-screen projection, painted backdrops, forced perspective, and other eye-fooling tricks (it helps if you squint).

We’re currently planning our shooting schedule, and are having to split many of our scenes into multiple shooting sessions. A scene in which our monster attacks a city while the same six extras run screaming over and over again, for example, has three layers:

Fun? Oh, yeah. Scary? Yah, you betcha. Because if I don’t learn enough to get it right, it’ll turn out to be a bigger disaster than the one on-screen. Oh, yeah, and it has to be funny. Rabidly, over-the-top funny. Fortunately, I have a brilliant team. But the buck (yen?) stops with me. So it’s time for me to sign-off. Because I’ve got a lot to do and, like Mr. Kurosawa,

So much to learn.

20 Responses to A Filmmaker’s Journal