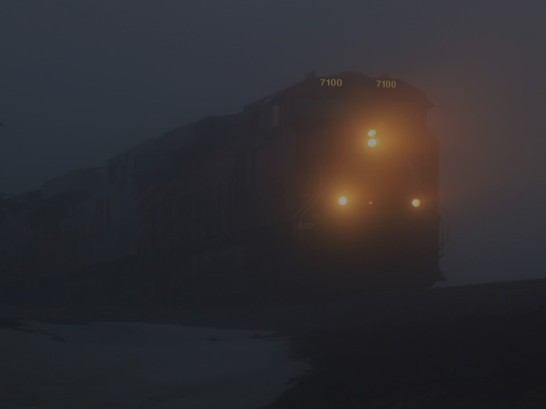 Part Two: Into the Fog

It was my buddy Jeff’s birthday. His mom decided to drive five of us to a Disney double-bill ten miles away across an unlit stretch called Dairy Valley.

The pizza was great (all pizza is great when you’re eleven) and so were the movies. The trip home was not. It was the foggiest night I’d ever seen, or rather not seen.

What Dairy Valley lacked in lighting it made up in railroad tracks. Milk train tracks crossed the road every half mile.

The first time a blinking R/R light went off, we jumped in our seats. Jeff’s mom waited and waited. No sign of a train. She hurried across the tracks and pressed on into the void.

Minutes later, the same thing happened again. Again no train, and again she shot across the tracks.

Five crossings later, we’d begun to wonder if there even were such things as trains.

And then we heard the whistle. No, not a whistle—a harsh, angry blaring that grew louder by the second. Unsure what to do, Jeff’s mom stopped and sat there. Should she stay put? Throw the car in reverse? The blaring grew deafening. We started screaming.

Jeff’s mom threw the car into gear and lurched forward. As she did, the car began to shake violently, and a blurred wall of metal appeared behind us. Only then did we realize…

We’d been sitting on the tracks.

The realization that we’d come within a breath of being crushed hit us like, well, a train. After the raging behemoth passed, Jeff’s mom got out and checked the back of the car. The bumper was still hot. We couldn’t have been more than an inch away.

It was then I realized that I couldn’t move; the shock had drained all of the strength from my legs.

We drove home in silence. Jeff’s mom was in a state of shock—she’d nearly killed herself and five kids.

I laughed about it the next day, but some part of my brain used this incident–coupled with the one a month before–to imprint on the idea of death-by-train.

I soon began calculating which family trips required crossing railroad tracks. When they did, I would beg my parents to let me stay home. When they refused, I would sit crying and shaking in the back seat as we neared each fateful crossing. My dad would point in both directions and say, “Look, no trains!” It didn’t matter.

My train phobia lasted almost two years. And then one day we visited Knott’s Berry Farm, a theme park near where I lived. I’d always loved its nineteenth century locomotive. But everything was different now.

For the first half of the day, I avoided the R/R crossing. But then something clicked: If I don’t face my fears they will own me forever.

So I waited for the train to come. When it did, I forced myself to face the beast. Then I did it again. And again.

By the end of the day, park employees were dragging me (laughing hysterically) away from the tracks. I went on very few rides that day. And yet I’d taken the ride of my life. Because…

Facing your fears is the ultimate thrill.

20 Responses to My Phobia