Movie Theaters I Have Loved 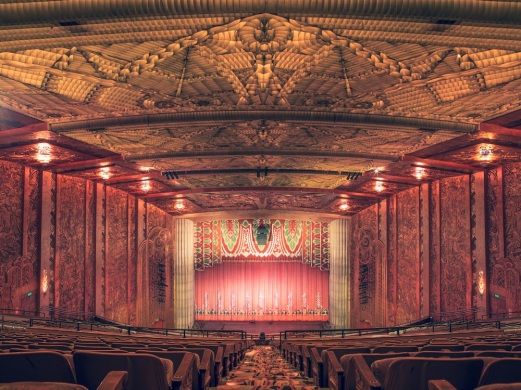 I was born loving movies, but seldom give proper credit to those magical rooms where movies blaze to life. So here are a few I have loved.

The Meralta Theater in Downey, California was where my addiction began. I saw Gone with the Wind there, and Tammy and the Bachelor and Old Yeller. It was a humble

neighborhood bijou, but it introduced me to that magical device, the movie projector. Interestingly, it also introduced me to live music when, on a warm suburban night a handsome young black man sang three tunes, and then passed out copies of his single, “You Send Me.” The man, who almost single-handedly invented soul music, was Sam Cooke, and he remains one of my favorite singers of all time. Humble theater, grand memories.

The Paramount in Los Angeles, on the other hand, was a golden movie palace. We’d go there to see exclusive “roadshow” presentations like Spartacus and The Ten Commandments. The first time we went, I was 5, and going through a silly word phase. At the street corner, I looked up and saw the theater’s towering neon “P,” and asked loudly, “What’s that stand for, penis?” I couldn’t understand why I got hushed and smacked just for making up a funny word.

When I was 7, we moved to the L.A. suburb of La Mirada, a cinema-deprived island until, as if by divine fiat from Charlton Heston, a movie theater appeared. In that vacuum tube-obsessed era (television), the La Mirada Theater was the first new movie house to break ground in the U.S. in a decade. Opening with the world premiere of the biblical epic Barrabas—we watched in awe as its star Anthony Quinn arrived in a rocket-finned limo—the LMMT was a glitter-stucco gift from heaven! I saw everything from Lawrence of Arabia to Beach Party to A Hard Day’s Night there, and, at 50¢ matinees, every Godzilla rampage and Three Stooges pratfall ever captured on film—two of the Stooges even made a live appearance one Saturday afternoon! I still remember leaving the LMMT after seeing Hitchcock’s deliciously horrifying The Birds. Just as the jittery, tightly-packed crowd pushed out the glass doors, a popcorn-seeking seagull dove under the overhang—and 500 people ran screaming back into the theater!

I could devote a whole post to the original three-projector Cinerama where I fell in love with How the West Was Won and Debbie Reynolds (once again). Or Grauman’s Chinese, where I dreamed of someday imprinting my feet. Or the Fox Fullerton where Mary Poppins made me believe I could stay a child forever. But no theater defines the movie-going experience for me so much as the old La Mirada.

Today, we watch “popcorn movies” at our local cineplex. What it lacks in nostalgia (or glittered stucco), it makes up in cushy, recliny comfort and in booming Dolby surround sound. But one thing hasn’t changed: my heart still speeds up…

When the theater lights dim.

37 Responses to Movie Theaters I Have Loved