Pray as if Your Life Depends on It!

The start of a new year felt like a good time to re-post this series. 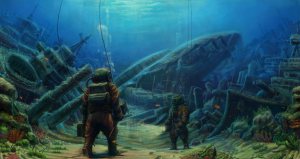 While I was busy working my way toward a college degree, my buddy Dean was busy working his way up Pacific Coast Highway. “He’ll never make a living without a degree,” I thought smugly. A short while later, I was the proud owner of a bachelor’s degree and a sub-minimum wage job selling encyclopedias. And Dean, I learned from a mutual friend named Roger, was making massive amounts of money! “Doing what?” I asked indignantly.

“Deep sea diving,” replied Roger (he’d worked with Dean off the Oregon coast). “What?” I snorted. “I thought that went out with Captain Nemo?” The image of Dean battling giant squids on the ocean floor flickered across my mind.

“Salvage work,” Roger explained, “old ship wrecks and dumped cargo. You can’t wear scuba gear ‘cause it’s too deep and you’re down there…

2 Responses to Pray as if Your Life Depends on It!