Posted on September 18, 2015 by mitchteemley 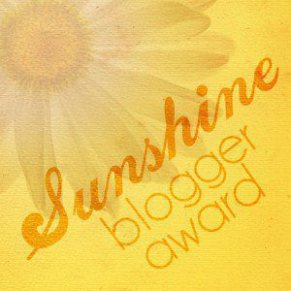 So, I’ve been nominated for a Sunshine Blogger Award by Kat Frost, the delightfully un-frosty blogger at More Than I’ve Been. My challenge: to answer a set of Questions and choose other worthy Nominees. Here goes:

What is your dream vacation?  Great Britain. My last name is kind of German, plus I have some French blood (sacré bleu!), but I’m at least 2/3rds British (English,

Irish, Welsh) and more than 2/3rds in love with the sceptered aisle. Both times I’ve visited, it felt like I was coming home: hanging with my London theatre friends, picking wild blackberries along the Thames in Oxford; eating fish and chips with Auntie Kath in sunny Kent (a friend’s aunt, actually, who unofficially adopted me). And, although my wife has never actually been there, she’s also an incurable Anglophile (descended from Tudor royalty, no less!). So we long ago agreed that our dream vacation would be an extended tour of the UK. The only question is whether we would ever leave.

If you could be one fictional character, who would it be and why?  Who: Dr. Elwin Ransom, the protagonist of C. S. Lewis’s Space Trilogy (Out of the Silent Planet, Perelandra, and That Hideous Strength). Why: To participate first hand in the ultimate redemption of the universe! (But then, I already am.)

What does your ideal day look like? Completely lost in storytelling: Writing so intensely that I hold in my pee and can’t be bothered to eat; or absorbed in shooting a film with a close-knit cast and crew (with some pee breaks); or editing that film; or recording music for its score.

If you could spend time with three famous people, who would they be?  No way I can boil it down to three, but here’s a sample of people whose wisdom I’d love to graze upon: the Apostle Peter (or Paul), St. Francis of Assisi, and C. S. Lewis. But wait, can’t I also have G. K. Chesterton, Evelyn Underhill, and Blaise Pascal? Oh, I just thought of some more…

P.S. If you’re wondering why I didn’t mention Jesus: I already spend every day with him.

What was the last song you listened to? An original tune written for the final scene of my current screenplay.

If you could tell everyone in the world one thing, what would it be?  The reason you exist is to know and love your Creator. Please say yes and come alive! (John 17:3)

Horizons of the Possible

In My Cluttered Attic

28 Responses to Call Me Mr. Sunshine